The giveaway is now closed.  Thanks for playing! 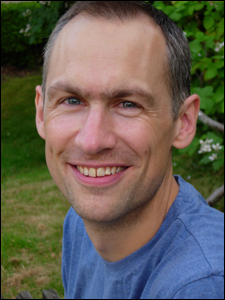 From AntonyJohn.net: Antony John was born in England and raised on a balanced diet of fish and chips, obscure British comedies, and ABBA's Greatest Hits. In a fit of teenage rebellion, he decided to pursue a career in classical music, culminating in a BA from Oxford University and a PhD from Duke University. Along the way, he worked as an ice cream seller on a freezing English beach, a tour guide in the Netherlands, a chauffeur in Switzerland, a barista in Seattle, and a university professor. Writing by night, he spends his days as a stay-at-home dad—the only job that allows him to wear his favorite pair of sweatpants all the time. He lives in St. Louis with his family.


Antony:  I have to admit that the narrator, Piper, came to me almost fully formed. I knew her voice, her attitude, her background, her outlook on life, and her flaws. It made writing the novel a whole lot easier to have such a connection with who she is.

There were also two scenes that very quickly found their way into the outline: the scene in the TV studio where Dumb implodes, and Piper is standing on the sidelines, pretty much helpless to do anything about it; and the salon scene, where Piper basically resolves to take control. Both scenes practically wrote themselves.

Now, the title is a pretty provocative one when you read that the main character is deaf. How did you decide on that title and the name Dumb for the band? It definitely makes sense once you read the book, but I wonder if you've heard any reactions to that title?

Great question! I absolutely expected people to get annoyed or offended by the title, but no one did! In fact, everyone loved it, with the notable exception of my wife, who thought it sucked and told me that my editor would make me change it. (This is possibly the only time in our marriage that I have been right.) But yes, the connotations of "dumb" felt very powerful to me, and get played out in a conversation between two deaf characters in the novel. But like I say, no one has objected at all, including my deaf readers.

As for how I chose the title, it just popped into my head. Really, it was that simple. And I think it conveys the madness perfectly. 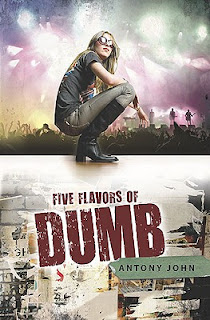 In the book, Piper and her band travel to the Seattle homes of Kurt Cobain and Jimi Hendrix.  Have you been to the places that Piper and Dumb visited in the book? How did you feel being there?  Why was it important that Piper and the band visit those places?

Yes, I've visited all of them (and will provide photos on my blog as proof!). Actually, it's kind of a
funny story . . .

I planned the book during spring 2008, but my agent wasn't going to pitch it until fall 2008. However, my family moved from Seattle to St. Louis in summer 2008, and I suddenly realized I wouldn't have access to all these places anymore. So in between packing boxes, I kept whisking my kids off to various Jimi Hendrix and Kurt Cobain sites around Seattle. They were both toddlers at the time, but they were troopers, and seemed to enjoy it all.

As for how it felt to visit Hendrix's house and Cobain's house . . . well, it felt vital, actually. And so much of what I saw in each place made its way into the novel. The flattened cardboard boxes at 2010 S Jackson Street were really there. The wilted daisies on the bench near Kurt Cobain's house were also there. Just to see how these places are used now was revelatory to me. In some ways, I'd say that those were the moments I literally allowed myself to become Piper, simply conveying my/her experience of being there.

The reason Piper and the band had to visit those places is partly because they are central to Seattle's
rock music history, and even more, because they are the physical reminders of Hendrix's and Cobain's humanity. I know that sounds kind of pretentious, but it's easy to get sucked into the celebrity-as-God mindset, and the truth is, neither of these men was Godlike. Not at all. They were terribly flawed, and all too human. Seeing their homes kind of reminds us that they're not so different from the rest of us. They just happened to have a gift for music that transcended their otherwise tragic lives.

Obviously, music is a big part of the book. What are some of your favorite bands?
Going old-school for a moment, I love The Beatles and The Rolling Stones: not just for the sheer quantity of awesome songs they wrote, but for the very clear evolution of their styles. It's a rare thing for a band to be so prolific and so consistently popular that they are given the opportunity to "grow." I also adore The Mamas and The Papas, even though -- or perhaps because -- their tuning is so wonderfully dubious.

And in case you think that doesn't make me eclectic enough, let me say that Britney Spears' "... Baby One More Time" is one of my favorite songs of all time. It's practically perfect.

I'm with you through the Beatles, The Mamas and the Papas, and several of the others, but I think you lose me with Britney Spears.  ;) And just like bands have musical influences, I'm sure writers have literary influences. What are some of your favorite YA reads?
You bet I have literary influences. In fact, so many that I don't have room to list them here. I don't even have room to list all the great rock music-themed novels that have influenced me (Gordon Korman's BORN TO ROCK; Robin Benway's AUDREY, WAIT!, Rachel Cohn and David Levithan's NICK AND NORAH'S INFINITE PLAYLIST, etc), so I'll pick two that everyone should read:

FAT KID RULES THE WORLD by K. L. Going: Go ahead, read the first chapter. You're hooked, right?  This book has that extraordinary balance of characterization and plot that makes it completely un-
put-downable.

BEIGE by Cecil Castellucci: Another beautiful example of the way that music allows people to express
their hidden selves. It's also exquisitely well-written, which is a bonus!

Awesome suggestions, Antony.  Thank you so much for stopping by today!

Thanks for the questions, Abby!
Now, readers, I know you all want to run out there and read Five Flavors of Dumb, and if you want a chance to win a signed ARC, please fill out the form below!  The giveaway is open to US residents only and entries will be accepted through November 3.