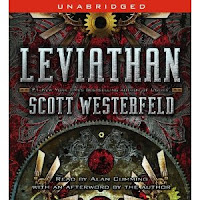 I reviewed Leviathan last year when I scored an ARC at ALA, so I'll copy the summary here but what I really want to tell you about today is the fabulous audio recording of this title!  If you're looking to refresh yourself before diving into the sequel Behemoth, I can highly recommend picking up the audiobook.

Are you a Clanker or a Darwinist?

Darwinists have unlocked the secret to combining DNA and fabricating fantastic creatures that fill all kinds of uses, from messenger lizards to giant hydrogen-producing whales as airships.

Alek is on the run. His parents were Austro-Hungarian royalty and they have been killed, some say, to start the war. Alek's very existence could threaten the Empire, so he goes into hiding for his own safety.

Deryn's got something to hide, too. Disguised as a boy she enlisted in the British Air Service. She loves to fly and lives to serve her country, but how long will she be able to keep up the facade?

When Alek and Deryn meet they have no idea that it'll change both their lives, but before they know it they're starting a fantastic journey that will change their lives forever.

I loved Alan Cumming's reading of this book.  He gets the accents down, which is awesome because our two narrators are Austrian and Scottish and the book takes place in Austria-Hungary, England, and Switzerland (maybe other places, too?  I forget...).  I also think he does a nice job of Deryn's voice, making it softer and more feminine without sounding fake.

Leviathan is on shelves now.


Hey!  I'm an Audible affiliate, so if you make a purchase after clicking on one of my affiliate links, I will receive a referral fee.
Abby at 7:11 AM
Share