In My Mailbox is a weekly meme hosted by Kristi at The Story Siren and designed to spread the word about upcoming books! Head on over to Kristi's blog to see what awesome books arrived in bloggers' mailboxes this week!

This week I got a couple of lovely boxes from Scholastic (very excited to see some titles from their fantastic and much-appreciated Librarian Preview Webcast) and a title from Tor as well! Since I don't want to clog up your reader with a super-long post, I'm going to skip the summaries, but I'll link (as always) to GoodReads and you can read summaries on there. 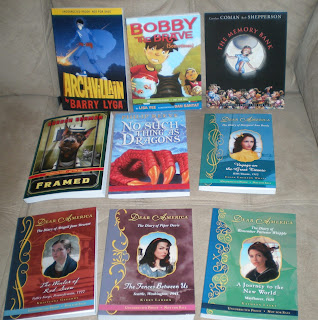 Archvillain by Barry Lyga (Scholastic Press, October 2010). - I actually already read this one and I liked it quite a bit. I'll have a full review up closer to the pub date.

Bobby the Brave (Sometimes) by Lisa Yee, illustrated by Dan Santat (Arthur A. Levine Books, September 2010). - I quite enjoyed Bobby Vs. Girls (Accidentally), so I'm excited for this one!

No Such Thing As Dragons by Philip Reeve (Scholastic Press, September 2010).

The Fences Between Us: The Diary of Piper Davis, Seattle, Washington, 1941 by Kirby Lawson (Scholastic, September 2010).

A Journey to the New World: The Diary of Remember Patience Whipple, Mayflower, 1620 by Kathryn Lasky (Scholastic, September 2010 - rerelease). 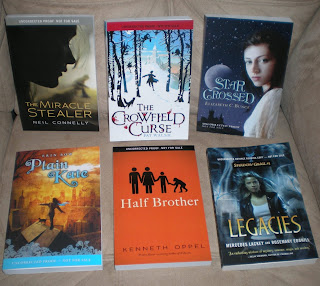 Star Crossed by Elizabeth C. Bunce (Arthur A. Levine Books, October 2010). - Oh, you should have heard the squee when I took this one out of the box! :) Check out my review of Ms. Bunce's first book A Curse Dark as Gold.

Plain Kate by Erin Bow (Arthur A. Levine Books, September 2010). I think I remember that the people at Scholastic were very enthusiastic about this debut, so I'm excited about it as well.

Half Brother by Kenneth Oppel (Scholastic Press, September 2010). There was another huge squee for this one. I'm a big fan of Kenneth Oppel. Very excited!!

Legacies (Shadow Grail #1) by Mercedes Lackey and Rosemary Edghill (Tor, July 2010). This is a YA debut by authors who have adult books, so that might count for the Debut Author Challenge...

Whew. Wonderful mailbox week for me! How about you?
Abby at 10:50 PM
Share
‹
›
Home
View web version