In My Mailbox is a weekly meme hosted by The Story Siren. Head over there and check out what books bloggers got in their mailboxes this week!

And here's what showed up in mine this week (all summaries are from ARC jacket copy): 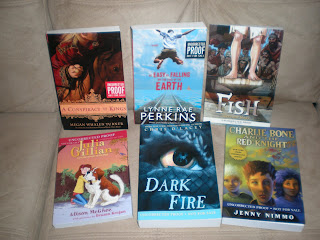 A Conspiracy of Kings by Megan Whalen Turner (Greenwillow, March 2010).

Heart-stopping action, intrigue, danger, revenge, and romance, with a hint of a supernatural force as great as the gods - here is the epic story of an unlikely prince and his quest to save his kingdom.

As Easy as Falling Off the Face of the Earth by Lynne Rae Perkins (Greenwillow, May 2010).

What happens when life throws curveballs, one after another, faster than a guy can blink? Lynne Rae Perkins has written an astonishing (and wonderfully funny) novel about how luck - both good and bad - helps us find ourselves, and gets us from here to there.

Maurice Reidy - nicknamed "Fish" because of his incredible swimming abilities - is sent to work as a courier to help support his struggling family. Entrusted with a mysterious package of coins, Fish is waylaid by pirates who abscond with his delivery. But he's determined to get the coins back by joining the crew: some of the wiliest (and smelliest) pirates on the high seas.

Julia Gillian (and the Dream of the Dog) by Alison McGhee (Scholastic, July 2010).

Now that Julia Gillian is a middle school "Sixlet" (sixth-grader), life is fundamentally altered. No longer do her teachers coddle her. No longer is recess the carefree pleasure it once was. Instead she must contend with schoolwork that involves "controlling for variables", a steely reading buddy who hates to read, and mortal fear of the burly "Sevvies" and "Crazy Eights" in the upper grades. Worse than all of this, Julia Gillian's beloved dog, Bigfoot, is slowing down, which makes her cozy, predictable world feel out of control.

Bestselling author David Rain was lost in the Arctic for five years. Now, his daughter, Alexa, has brought him back, but a lot more has returned to Earth with him. Dragons are back as well. And with them is a hidden trace of dark fire, the deadliest force in the universe. Life hangs in the balance as David, Lucy, and the Pennykettle dragons must destroy the dark fire before it's discovered and used to birth a darkling. Yet David's success could come at a terrible price - the sacrifice of a beloved dragon.


Charlie Bone and the Red Knight by Jenny Nimmo (Orchard Books, May 2010).

Dark forces are gathering at Bloor's Academy as the Bloors search for a lost box containing a hidden will - a will that reveals the true destiny of the Red King's heirs. And the Bloors are determined to keep Charlie Bone from finding it first. But Charlie is also facing the lord of the sea, who is trying to drown his parents, and a deadly expert swordsman from another century. The Red Knight might be the only hope. But who is the mysterious Red Knight? And can he help Charlie and his friends defeat the evil magic for good?

How about you? Did your friendly delivery person bring you anything awesome this week?
Abby at 7:11 AM
Share
‹
›
Home
View web version