In My Mailbox is a weekly meme hosted by Kristi of The Story Siren! Head on over there to see what books appeared in bloggers' mailboxes this week!

Here are the books I got this week:

Marie-Antoinette is given endless instructions before she leaves Austria at the age of fourteen to marry the dauphin of France. In her new home at the grand palace of Versailles, her every move is scrutinized by the cruel and gossipy members of the French court. Marie-Antoinette tries to adhere by their stiffling rules of etiquette, but sometimes, this fun-loving young woman can't help but indulge herself with scandalous fashions, taboo recreations, elaborate parties - and even a forbidden romance... Though she would be remembered by the revolutionaries as an obscene spendthrift, perhaps Marie-Antoinette had more in common with them than they thought - for she too was a rebel who lived by her own rules.

*Note: this is the third book in the Crispin trilogy and may contain SPOILERS for the first two books!*

After the death of their beloved mentor, Bear, Crispin and Troth are more desperate than ever, wandering the desolate French countryside, where they don't speak the language and know no one. The only hope they cling to is that somehow they can reach Iceland, where Bear had said there were no kings or lords, and where they can live in freedom. Crispin is determined to fulfill this dream, both for himself and to honor Bear's memory. But the road to liberty is filled with danger, betrayal, and loss. Crispin must decide for himself what freedom really means - and how high a price he is willing to pay for it.

Mason has never known his father, but longs to. All he has of him is a DVD of a man whose face is never seen, reading a children's book. One day, on a whim, he plays the DVD for a group of comatose teens at the nursing home where his mother works. One of them, a beautiful girl, responds. She is part of a horrible experiment intended to render teenagers into genetically engineered, self-sustaining life forms who don't need food or water to survive. And before he knows it, Mason is on the run with the girl, and wanted, dead or alive, by the mysterious mastermind of this evil plan, who is simply called The Gardener.

A review is coming very soon on this one because I picked it up the day it came and kind of couldn't put it down.

Blue moon, magic moon... good for wishing. To ten-year-old Keeper, this moon is her chance to fix all that has gone wrong... and so much has gone wrong. But she knows who can make things right again: Meggie Marie, her mermaid mother who swam away when Keeper was just three. A blue moon calls the mermaids to gather at the sandbar, and that's exactly where Keeper is headed - in a small boat, in the middle of the night, with only her dog BD (Best Dog), and a seagull named Captain. When the riptide pulls at the boat, tugging her away from the shore and deep into the rough waters or the Gulf of Mexico, panic sets in, and the fairy tales that lured her out there go tumbling the waves. Maybe the blue moon isn't magic and maybe the sandbar won't sparkle with mermaids and maybe - Oh no... "Maybe" is just too difficult to bear.

I'm halfway through this one and it's very good so far. I've been looking forward to this one since I loved Kathi Appelt's The Underneath.

It begins with mysterious sounds, a fleeting face outside a window - all things that can be explained away. That is, until he comes face-to-face with a character who only exists on the pages of a sketchbook - a character Marshall himself created. Marshall is quickly convinced these strange incidents have something to do with his best friend, Cooper, who has gone missing. Together with Cooper's beautiful but aloof sister, Sydney, Marshall searches for the truth about his friend while ultimately uncovering a nightmare that is bigger and more frightening than he ever could have imagined. 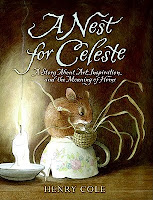 Celeste is a mouse who is looking for a home. Is it nestled in the toe of a warm boot? In the shirt pocket of Celeste's new friend Joseph, who is Audubon's apprentice? Or is home the place deep inside Celeste's heart, where friendships live?

This looks very cute and has adorable illustrations.

Roberto and Me by Dan Gutman (HarperCollins, April 2010). Jacket flap:

Sometimes you can change history... and sometimes history can change you. When Stosh travels into the past to meet Roberto Clemente, a legendary ballplayer and a beloved humanitarian, he's got only one goal: warning Roberto not to get on the doomed plane that will end his life in a terrible crash. In the sixties, Stosh meets free-spirited Sunrise, and together they travel across the country to a ball game that leaves them breathless - and face-to-face with Roberto. But when the time comes for Stosh to return to the future, he finds that the adventure has only begun...

Best. Birthday. Ever. At least it was supposed to be. With Logan's band playing a crucial gig and Aura's plans for an intimate after-party, Aura knows it will be the most memorable night of her boyfriend's life. She never thought it would be his last. Logan's sudden death leaves Aura devastated. He's gone. Well, sort of. Life everyone born after The Shift, Aura can see and talk to ghosts. This mysterious ability had always been annoying, and Aura had wanted nothing more than to figure out why The Shift happened so she can undo it. But not with Logan's violet-hued spirit still hanging around. Because Dead Logan is almost as real as ever. Almost. It doesn't help that Aura's new friend Zachary is so understanding - and so very alive. His support means more to Aura than she cares to admit. As Aura's relationships with the dead and the living grow ever complicated, so do her feelings for Logan and Zachary. Each holds a piece of Aura's heart... and clues to the secret of The Shift.

Fadi never imagined he'd start middle school in Fremont, California, thousands of miles from his home in Kabul - and half a world away from his missing six-year-old sister Mariam. Adjusting to life in the United States isn't easy for Fadi's family, and as the events of September 11 unfold, the prospects of locating Mariam in war-torn Afghanistan seem slim. When a photography competition with a grand prize of a trip to India is announced, Fadi sees his chance to return to Afghanistan and find his sister. But can one photo really bring Mariam home?

This was another one I was so excited about, I picked it up immediately and read the whole thing. A review will be coming soon.

Worldshaker by Richard Harland (Simon & Schuster, May 2010). Summary from ARC:

A ship as large as a city... a forbidden romance... and a society on the cusp of revolution. Col Porpentine know his place in the world: at the top. He is a child of privilege, born into the Upper Class. When he is named as successor to his grandfather, the Supreme Commander of the juggernaut Worldshaker, his bright future has never been more assured. But when a Filthy girl seeks refuge in his cabin, nothing is clear anymore. Col has known since childhood that the Filthies are subhuman, dumb creatures good only for toiling Below and keeping Worldshaker moving. But Riff is quick and clever and shockingly beautiful, and her very presence tears Col's carefully ordered world apart...

I hadn't heard of this one before, but it looks steampunk-riffic, so I'm excited to give it a try. The author's Australian.

So, yes. A very exciting mailbox week for me! How about yours?
Abby at 11:21 PM
Share
‹
›
Home
View web version