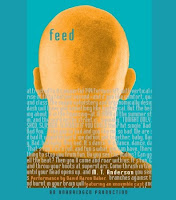 Okay, so not only is this an awesome, intense, well-written book, but the audiobook is really fantastic.

"We went to the moon to have fun, but the moon turned out to completely suck." So says Titus, a teenager whose ability to read, write, and even think for himself has been almost completely obliterated by his "feed", a transmitter implanted directly into his brain... But then Titus meets Violet, a girl who cares about what's happening to the world and challenges everything that Titus and his friends hold dear. A girl who decides to fight the feed."

Narrator David Aaron Baker does a great job with the voices, capturing the cadence of teen speech. That's essential because it's one thing that makes the story so great - it's set in the future and the kids deal with unique problems, but they still sound like teens. They act like teens. The characters felt completely real, even though they are traveling in flying cars and chatting with each other using the internet inside their brains.

The "special effects" in the recording were great, too, and really added to the listener's understanding. There's a slight echo effect when the characters are chatting each other, giving the voices a kind of tinny quality to differentiate from when they're speaking out loud. And throughout the book, you're periodically interrupted by snippets of commercials, "TV" shows, and news reports (just like you actually had a feed sending you constant information). These snippets sound like actual commercials and news reports. They're very, very well done and add to the overall atmosphere of the book.

The Feed makes a GREAT audiobook and I can't recommend it enough for teens and adults looking for a good listen. (Fair warning, there is a fair amount of foul language.)

(Many, many thanks to Kelly at Stacked for recommending it!!)

Now, for the bad: 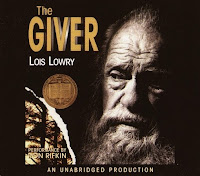 The Giver is one of my favorite books of all time, so I was excited to revisit it on a recent car trip.

Jonas lives in a future where people have embraced Sameness. At the age of 12, everyone is assigned a career by the panel of Elders that guides their community. When Jonas is assigned the most prestigious career, Receiver of Memories, he discovers the cracks in his Utopian community.

Ron Rifkin does a great job narrating the story. Characters have voices that are subtly different, enough so that you can tell them apart.

The problem here is that whenever something strange and "magical" happens (like the transferring of memories), there is this terrible, distracting music playing. I get that it's intended to set apart the special events, but I just found it distracting. I wished that the music would stop so I could listen to Rifkin's excellent narration. And the worst thing is that the scenes with the music are some of the most emotionally moving scenes in the book. Since I was already familiar with the story, I'd gear myself up for the big reveals, only to be totally annoyed by the swelling music.

Maybe someone who wasn't familiar with the story might find it useful, but I think Rifkin's narration would have been just fine alone. I'd definitely recommend picking up The Giver, but I'm afraid I can't wholeheartedly recommend the audiobook.