Around the interwebs: Shiny awards edition 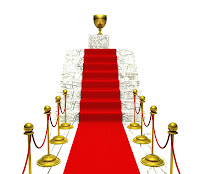 Oh, the shiny, shiny awards, they have been awarded. In addition to the ALA Youth Media Awards (Newbery, Caldecott, Coretta Scott King, Pura Belpre, etc.), here are some others you'll be interested in. The American Indian Youth Literature Awards were announced as well as the Sydney Taylor Book Awards. And YALSA's just bursting at the seams with 2010 best-of lists including Amazing Audiobooks, Best Books for Young Adults*, and Great Graphic Novels for Teens. Betsy reminds us about the NCTE Orbis Pictus Award for nonfiction (link opens a PDF) and the Edgar nominees for juvenile fiction (there are also Edgar nominees for YA fiction).

Just days before The Day Glo Brothers was awarded a Sibert Honor, author Christ Barton's son had this to say. And in case you missed Rebecca Stead and Jerry Pinkney on the Today Show (what, did you blink or something?)... Thanks to 100 Scope Notes for the link.

*And yes, BBYA is officially undergoing some changes. Marc Aronson has thoughts. Liz Burns is confused. And I, having just joined YALSA for the first time, have no opinion at this time, but you can be certain I'll be interested to see what happens.

In non-award-related news, Bloomsbury has stopped selling copies of Magic Under Glass and will be making copies available with a different cover shortly. They apologize for their mistake. Good work, kids, but I still echo Justine Larbalestier in saying that the way we're really going to fix this recurring problem (Mysterious Benedict Society, anyone?) is by putting our money where our mouths are. If you want to see more books about people of color published, if you want to see more book covers that feature people of color, start buying them and/or start reviewing them.

As you wait for the mid-February announcement of the 2009 Cybils winners, be thinking of any questions you have about the Cybils. Anne's updating the FAQs and needs you to send in your questions.

And last, but certainly not least, mark your calendars because The Brown Bookshelf's 28 Days Later feature is gearing up and will kick off February 1! Check out that stellar lineup and don't forget to tune in February 1 for the first of 28 great author and illustrator features. Thanks to @JensBookPage for the reminder.