If you've got a drama queen to buy for this winter, this list is for you. And by "drama queen", I mean someone who's totally into acting and theatre, of course!

Dramarama by E. Lockhart is a story about a girl from a razzle-dazzle-deprived small town who dreams of making it big. When she and her best friend Demi go to summer theatre camp, Sarah's sure that she's going to steal the show and find true love. Well, things don't turn out exactly as she had planned... If you're buying for a teen

who loves musicals, take a gander at this one.

Suite Scarlett by Maureen Johnson. Scarlett Martin is pretty sure it's going to be a totally boring summer. All her best friends have left New York to do fun things because their families have lots of money. Scarlett is stuck in NYC working at her family's run-down hotel. But things start looking a little more interesting when a wealthy, eccentric actress moves into the hotel for the summer. And then Scarlett meets Eric, a hunky actor who's friends with her brother. Maybe this summer won't be so boring after all... (Read my full review of Suite Scarlett.)

you've got a Shakespeare fan in your midst, consider Eyes Like Stars by Lisa Mantchev. Bertie has been raised in the Theatre Illuminata, a magical theatre where the Players (characters of every play in existence) live, just waiting until show time. When evil forces threaten to destroy the theatre, Bertie must find it in herself to save the only home she's ever known. (Read my full review of Eyes Like Stars.) Pair it with a volume or set of complete Shakespeare works. 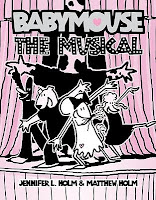 I can't resist a plug for Babymouse: The Musical by Jennifer L. Holm and Matthew Holm. The school's putting on a musical and when dreamy British newcomer Henry encourages Babymouse to try out she can't help but show up at auditions. When she's given the part of Felicia's understudy, Babymouse is sure she'll never get on stage. With tons of musical references (from Phantom to West Side Story to Evita to Fiddler and more!), this is a surefire hit with any fan of musicals. What can I say? I love me some Babymouse.