In My Mailbox is a weekly meme hosted by Kristi of The Story Siren!

Boy howdy, this was an amazing mailbox week (although technically I received most of these last week - but I didn't have a chance to pick up the package from the office until Monday morning, so there ya go).

I want to reiterate that I'm not trying to be all Look at me! I got ARCs! Consider this an early heads up about some books that are coming out over the next several months.

I got a delightful box from Scholastic containing the following books: 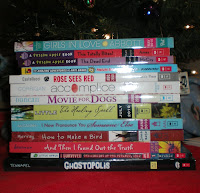 WHEW. And as if that weren't enough, I also received a couple from Egmont:

Raised by Wolves by Jennifer Lynn Barnes (Egmont, August 2010). Summary from the ARC: At the age of four, Bryn watched a rogue werewolf brutally murder her parents. Alone in the world, she was rescued and taken in by Callum, the alpha of his pack. Now fifteen, Bryn's been raised as a human among werewolves, adhering to pack rule (mostly). Little fazes her.

But the pack's been keeping a secret, and when Bryn goes exploring against Callum's orders, she finds Chase, a newly turned teen Were locked in a cage. Terrifying memories of the attach on her mom and dad come flooding back. Bryn needs answers, and she needs Chase to get them. Suddenly, all allegiances to the pack no longer matter. It's Bryn and Chase against the werewolf world, whatever the consequences.

I have enjoyed several of Jennifer Lynn Barnes's previous books, so I'm really looking forward to this one! (Plus, dude, werewolves are hot right now, for serious!)

Epitaph Road by David Patneaude (Egmont, March 2010). Summary from ARC: In 2067, an airborne virus wiped out 97 percent of the male population. Thirty years later, women rule the world and have ushered in a new golden age on Earth. Poverty, crime, war, and hunger have all disappeared. Growing up in this utopia, fourteen-year-old Kellen Dent feels isolated as one of the few males alive.

When a rumored outbreak of the virus threatens Kellen's outcast father, he knows that he must warn him of the coming danger. During his desperate race to find his dad, Kellen uncovers a secret so frightening that his life and the future of the world will never be the same.

So, yes. This was a wonderful mailbox week for me! How about you? What was in your mailbox?
Abby at 7:11 AM
Share
‹
›
Home
View web version