It's been a busybusy week in Abbyland, but I've managed to do a little surfing... let's see... 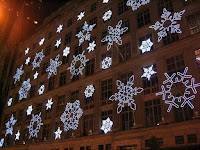 n running around like a crazy person, the 2009 Winter Blog Blast Tour has been going on! Don't miss it! Check out interviews with some of your favorites authors including (but not limited to) Mary E. Pearson, Megan Whalen Turner, Patrick Carman, and Laini Taylor.

And OMG November is almost over and I still haven't posted a link to Liz's roundup of web resources to celebrate American Indian Heritage Month. Sorry, I fail. That great roundup does not fail.

I nominate Travis as Blogger Laureate. For serious. Internet round-ups? YER DOIN IT RIGHT. Head over to 100 Scope Notes and check out his new feature, Morning Notes. It puts Around the Interwebs to SHAME. (S'ok.)

If you've got a hankerin' for a good book discussion, consider joining Michelle of GalleySmith for her Literary League Book Club. They've got some great books lined up for the next few months .

Jennie's blog is turning FIVE and she is throwing a big party over at Biblio File! Who doesn't love a big party, right?

In case anyone's started thinking about holiday shopping already, MotherReader's got a collection of Amazon bargains. Chicken Spaghetti's got an incredible list of Best-of-2009 lists and Shelftalker has a comprehensive list of starred titles (thanks to Travis for both links). For that extra-special gift, consider supporting independent bookstores by purchasing a signed and personalized book through Books with Flair (link via Blue Rose Girls). Books with Flair pairs authors with indie bookstores to provide signed books for gifts this holiday season.

(And don't forget to stay tuned RIGHT HERE for 12 Days of Giving, which is coming up here after Thanksgiving. If you want to suggest someone you have to buy for this season, leave it in the comments!)

/shameless plug. Where was I?

If you've ever wondered why series books sometimes tend to expand in length exponentially as the series goes on, well, Editorial Anonymous can shed some light.

If you're one of the mad hoards who headed out at midnight to see New Moon, you might be interested in John Green's defense of liking Twilight. Amen, brotha. And speaking of Twilight, Anna shares her plans for an after-hours New Moon party over at Y Shush?

And on that note, I'M OUT. Next week should be much less crazy. SHOULD BE. We'll see...