In My Mailbox is a weekly meme hosted at The Story Siren. Head on over there to see what's been in everyone's mailbox this week.

It's been a slow couple of weeks, mail-wise, which is absolutely fine. Soon those Cybils nominees will be coming in and I'm sure I'll be overwhelmed. This week I received the entire Blue Bloods series by Melissa De La Cruz. The latest one, The Van Alen Legacy, was recently released and I'm looking forward to giving them a try! 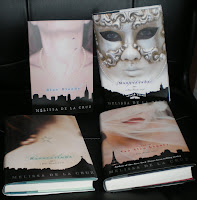 Review copies are from Hyperion Books.
Abby at 7:11 AM
Share