On Saturday, September 26 I ventured back up to Chicagoland to attend the 6th annual Anderson's Bookshop YA Literature Conference. This is a really fun event featuring some of the hottest YA authors and I love it because it is small enough to feel like an intimate experience and big enough to attract some really fun authors.

This year's conference featured Judy Blundell, Ellen Hopkins, James A. Owen, Gennifer Choldenko, and Libba Bray and those are just the keynote speakers!

The day started out with breakfast in the ballroom of the fabulous Arista Hotel and then Judy Blundell was up. Interesting fact: did you know that Judy Blundell has written tons of Star Wars books (and one of the 39 Clues books) under the pseudonym Jude Watson? She'd been a writer for hire for some time when her friend David Levithan encouraged her to write the story she wanted to write. And she wrote What I Saw and How I Lied. Though she was convinced that her book would disappear amidst all the press The Hunger Games was getting, What I Saw went on to win the National Book Award last year.

Next up was Ellen Hopkins (who is really funny!) and this was a very interesting talk because the day of the conference was the first day of Banned Books Week*. And Ellen has very recently faced a challenge to her books in an Oklahoma middle school. So you can imagine that she had something to say!

I found out that the books Crank and Glass are loosely based on Ellen's daughter's experience with addiction. And if you think that there's no reason to give kids access to books that deal with drugs or the other issues Ellen's characters face, well, Ellen's got a boxful of letters that say otherwise. She read several letters she had gotten from readers telling her how much the stories meant to them and how the books helped them deal with situations in their own lives.

After Ellen's talk, we broke out into our first small sessions. For the breakout sessions, authors were organized into panels. I first attended the Local Treasures panel, featuring authors located in the Chicago area. The authors on this panel were Susan Fine, Daniel Kraus, Cynthea Liu, and Claire Zulkey. Later, I stalked Cynthea who was Pretty in Purple (and perfectly matching her book cover!) for this picture: 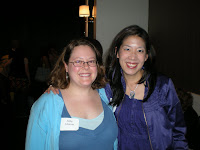 I love the panels because they give you a chance to sit in a smaller crowd with the authors and ask questions, but I will say that I liked the way last year's panels were organized around specific subjects (such as researching historical fiction or debut authors). It seemed to me like the authors probably were asked the same questions over and over as each new group came in and it would have been more interesting (to me) if the panels had been structured to give them some guidance on what to talk about. There was a lot of "Where do you get your ideas?" and "Do you try to write for a certain age group or do you let your publisher figure that out?" and so forth.

After the first round of panels, we had some bookstore and signing time and I purchased th

An Off Year by Claire Zulkey (Dutton Juvenile, September 2009). 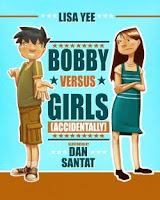 After lunch, we heard James A. Owen speak about his path to writing the Imaginarium Geographica series. It was a very twisty path that included having his drawing hand crushed in a car accident right while he was trying to get his start in creating comic books. His memorable quote of the day was "If you really want to do something, no one can stop you. If you really don't want to do something, no one can help you." It was about this time that I realized I had better start taking some pictures or my post was going to be really boring. ;) 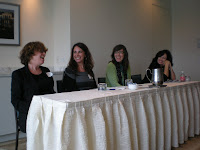 And then Contemporary Writing with Ellen Hopkins, Jill Wolfson, and Lisa Yee. Here's the contemporary panel (left to right - Wolfson, Yee, and Hopkins): 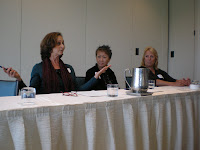 Next up were talks by Gennifer Choldenko and Libba Bray, both of whom are fabulous. I had previously underappreciated Al Capone Does My Shirts (although I still want to call it Al Capone Does My Shorts) until I "reread" it on CD on the way up to the conference. I think I wanted it to be funny and it wasn't particularly funny. Anyway, this time around I really enjoyed the book and I was excited to hear her talk. 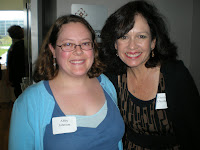 Add to things I didn't know: Gennifer has a sister with autism. She (Gennifer) worked on Alcatraz to get a feel for the setting. And the Al Capone books will be a trilogy and the current working title for the third book is Al Capone is My Librarian (I hope it keeps that title!!!).

So, after Libba Bray, they wound things down. I won a door prize for the second year in a row (a signed copy of TTYL that is going to my YA librarian for her teens). In general, it was quite an awesome time and I'm already looking forward to next year (and maaaybe the Children's Literature Breakfast depending on who the authors are...).

*(Speaking of censorship, librarians, you might want to read this Wall Street Journal article that comes out against the ALA fighting censorship. Oy.)
Abby at 7:11 AM
Share
‹
›
Home
View web version