Waiting on Wednesday is hosted by Breaking the Spine. Here's what I'm (patiently?) waiting for this week... 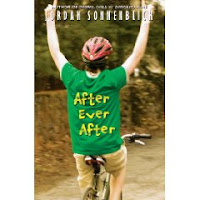 After Ever After by Jordan Sonnenblick (Scholastic, February 2010).

ZOMG, a sequel to Drums, Girls, and Dangerous Pie?!?!?! Must.. have.. now.. (Thanks to The Story Siren for posting about this one and tipping me off!)

Jeffrey isn't a little boy with cancer anymore. He's a teen who's in remission, but life still feels fragile. The aftereffects of treatment have left Jeffrey with an inability to be a great student or to walk without limping. His parents still worry about him. His older brother, Steven, lost it and took off to Africa to be in a drumming circle and "find himself." Jeffrey has a little soul searching to do, too, which begins with his escalating anger at Steven, an old friend who is keeping something secret, and a girl who is way out of his league but who thinks he's cute.
Abby at 7:11 AM
Share
‹
›
Home
View web version