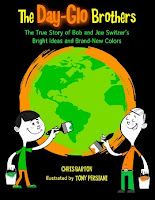 Bob and Joe Switzer grew up in Montana and California in the 1920s and '30s, sons of a pharmacist. Bob wanted to become a doctor, while his brother Joe lived to delight audiences with his magic acts. After a head injury ended his dreams of becoming a doctor, Bob had to spend a summer recovering in a darkened basement and it was then that he helped Joe experiment with blacklights as a way to improve his magic act. Under the blacklights, the brothers saw a chemical-soaked label glowing and they set about creating flourescent paints that glowed in the dark.

Many businesses used their paints to decorate ads and displays, but the paints faded in daylight. After many different experiments, the brothers discovered a way to make their paints glow under regular white light. Voila Day-Glo!

Besides brightening up products and ads, Day-Glo colors found many uses during World War II. They were used on buoys and on signaling devices. Today, flourescent colors are used for traffic cones, highlighters, and many other items. (Check out these animations that explain how daylight flourescence works and how it's different from normal colors.)

It's books like The Day-Glo Brothers that remind me why I love nonfiction picture books and particularly picture book biographies. The book is the perfect amount of information on a subject that I never would have thought to wonder about. Add brilliant illustrations that pair perfectly with the text and you've got a delightful reading experience.

The cartoonish illustrations start out black and white. When Joe and Bob discover the glowing label, Tony Persiani adds flourescent colors. And on the spread where Joe and Bob see their first Day-Glo billboard, the illustrations burst into full Day-Glo colors.

I think this is a perfect story to capture the imaginations of kids. I mean, inventing a new color? What a cool thing to do with your life!

Check out more reviews at BoingBoing and A Fuse #8 Production, and here's a Cynsations interview with Chris Barton. (Um, and especially check out the interview because she's giving out five signed copies of The Day-Glo Brothers, deadline to enter is July 31!) Chris Barton and Tony Persiani were also featured on Seven Impossible Things Before Breakfast, so check that out, too.