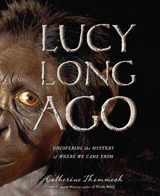 Lucy Long Ago: Uncovering the Mystery of Where We Came From by Catherine Thimmesh. (Grades 5-8.)

Long ago, it lived... even before it had a name. It climbed on trees; it roamed the savannah on two legs; it munched on berries and grasses.

In its time, the dinosaurs had been extinct for more than sixty million years. A few million years would pass before modern humans would walk the earth that it now roamed upon.

So begins the story of Lucy, a fossilized hominid skeleton, that was discovered in Africa in 1974. The scientists that discovered Lucy were ecstatic. It was just what they were hoping to find. But they soon had questions. Lots of them.

Was Lucy with her small, chimpanzee-like skull more closely related to apes? Or did her human-like pelvis indicate that she was a direct ancestor of modern humans? How old was she? Did she use tools?

In Lucy Long Ago, we get a glimpse at the scientists who discovered Lucy and asked questions about her in order to better understand where we came from. Fossils such as these are extremely rare and the discovery of Lucy changed how many scientists thought about ancient hominids.

Catherine Thimmesh, author of the Sibert-winning Team Moon, delves into this complex subject with aplomb. She explains everything in a clear, concise way. The writing is really tight, moving from an intriguing introduction to the various questions that scientists asked about Lucy and how they went about answering them. I thought it was the perfect amount of information - enough to clearly explain, but not so much that you got bogged down.

The format of the book - many pages are dark with light text on them - perfectly complements the subject. Our ancient ancestors are shrouded in mystery. Photos and illustrations add to the text and sidebars provide information that further clarifies what anthropologists do to find out about the past.

An index, glossary, and list of sources make this a great resource for reports. The clear, concise writing make it great for recreational reading, too. I don't know if this is a topic that many kids will know they're interested in, but the model of Lucy peering mournfully from the cover may be a draw.

I know it's only March, but let the Sibert buzz begin. This is a great follow-up to Team Moon.
Abby at 1:00 PM
Share
‹
›
Home
View web version