So, the kidlitosphere is all abuzz with talk of the Youth Media Awards and I have to confess that I couldn't wait to get home from work tonight so I could buzz, too.

The live webcast was great because even if you were, say, out at the reference desk with no sound you could still read the awards. The live Twitter was great until it went kablooey just before the Caldecott and Newbery medals were announced. (My, there was some freaking out going on in Twitterland just then.)

So, The Graveyard Book won the Newbery. I'm not at all surprised (and after all, we did have this on our Mock Newbery list) and the more I think about it the more it seems like a great choice. It's got kid appeal. It's a "boy book". And Neil Gamian wrote an adorable post about getting the news. Okay, I admit it was far from my favorite book of 2008, but that's okay! I'm on board with this medal winner.

I'm also on board with the honor books! Yay for The Underneath! And Savvy! I was very surprised and delighted to see Savvy on the list. Ingrid Law was surprised and delighted, too. I haven't read After Tupac & D Foster and I had never even heard of The Surrender Tree (but rest assured I have checked it out and will read it tonight). My coworker J said to me that it's a very crowd-pleasing list. It's got kid appeal. A first-author. "Ethnic" titles (for lack of a better term). Something that's not a novel (poetry). A little bit of something for everyone.

I am astonished that Chains didn't get any recognition. But hey, it won the Scott O'Dell award and Laurie Halse Anderson got the Margaret Edwards Award, so that's pretty awesome 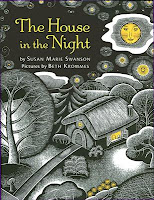 I'm not at all surprised that The House in the Night took the Caldecott medal. It's just gorgeous.

I'm also not surprised that Jellicoe Road took the Printz. It's... well, let's just say that it's not my favorite book and leave it at that. I am very pleased about the Printz honor books, especially Frankie, which was a Cybils finalist.

I'm so happy for Mo Willems, winner of the Geisel Award for Are You Ready to Play Outside? We love Elephant and Piggie! I'm also happy about Chicken Said, "Cluck!" and Wolfsnail, which were a couple of favorites for me, as well. 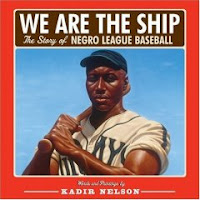 No one is surprised by We Are the Ship taking the Sibert and Coretta Scott King. It's a good thing the book is so large so that all the medals will fit on it. :) I'm a little bit surprised that Kadir Nelson didn't edge in on the Caldecott action, but I suppose three awards will do...

What else? What else? I'm happy to see Waiting for Normal being recognized and Jerk, California is definitely on my TBR list. Both received Schneider Family Book Awards.

Oh, and I was also excited to see Bodies From the Ice win a Sibert honor. And I'm happy to see A Curse Dark as Gold take home the first Morris Award (Elizabeth C. Bunce was happy about that, too!).

So, the excitement's over for now. I just have one more comment I'd like to make and that is about how awesome the blogosphere is. I mean, it takes awhile for the ALA websites to be updated, but the winners could be live-blogged and you could read people's reactions immediately. It was especially fun for me to see the reactions of the authors who were honored. And Twittering about the winners was great. My beloved John Green wasn't honored today, but he was providing live commentary as the awards were announced, as were several other bloggy friends. Makes me feel all warm and squishy to be part of a community that cares about books like that. :)
Abby at 6:37 PM
Share
‹
›
Home
View web version