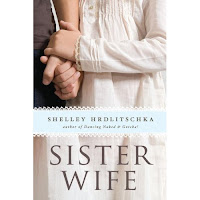 Celeste is about to turn fifteen, the age at which the Prophet will consult with God to assign her to a husband. She's in love with another boy at Unity, but she knows she will be in trouble if anyone finds out. Taviana was invited to Unity so she could get off the streets and clean up her act. She knows she doesn't really belong there, but she's grateful that she doesn't have to turn tricks to survive. Nanette is Celeste's younger sister and she has perfect faith. She's happy with the life she has at Unity and fears for her sister's immortal soul.

Celeste has two options: she can stay at Unity and live the life that the Prophet designs for her or she can leave Unity and break all ties with her family forever. Neither one is really a choice. And Celeste will have to find the balance between what she needs for herself and what her family needs from her.

I really enjoyed this book and the more I thought about it, the more I liked it. Lots of details bring the commune to life. Celeste and Nanette have grown up in a household with a father and his four wives. A wife's job is to take care of the house and have lots of children, so babies are everywhere. Women are married young to much older men and their schooling stops at about seventh grade.

As Celeste is trying to figure out what to do, she discovers rock statues along the river, made by a local boy. The statues seem impossible at first - rocks balanced precariously, forming tall towers. The statues become a metaphor for Celeste's life as she has to find the balance between betraying her family and betraying herself. She's also a "middle of the road" character, balanced between Taviana's knowledge of the wide world outside Unity and her sister's perfect devotion to the Movement.

There's an obvious comparison to be made with The Patron Saint of Butterflies, another 2008 book about teen girls in a religious commune, but the books are actually very different. While PSB was about the journey out of the commune, Sister Wife is about the heartwrenching decision to stay or to go.

I was excited to read this one after Amanda raved about it so, and I wasn't disappointed. I think this is one that will appeal to teens and adults alike. Check out Shelley's blog and read an interview with her to find out what inspired her to write this book.
Abby at 6:34 PM
Share
‹
›
Home
View web version