The night was filled with awesome

Okay, so we didn't actually get to Anderson's until about 10 minutes before the event was to start. So we were stuck at the back while John Green was talking and answering questions. Because 65 gazillion people were there. And even though he was standing on a chair (at great risk to life and limb), I couldn't really see him at all during his talk. But that is totally fine because seeing John was totally awesome, as always.*

Phrase that needs to be used more: Edward Cullenization. As in the Edward Cullenization of romantic interests in teen books. As in putting your love interest on a pedestal and seeing nothing wrong with them ever, having this idealized version of them in your head that no one could ever really live up to. As in, I have certainly Edward Cullenized John Green. Because I love him. And he is awesome. 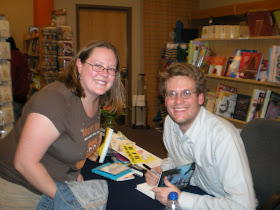 *Okay, so I have only seen him twice, including this time. But I wholeheartedly believe that there could never be a time when seeing John Green would not be awesome. So... yeah.
Abby at 10:57 PM
Share
‹
›
Home
View web version