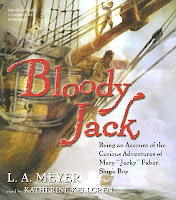 Young Mary Faber is just eight years old when both her parents die of "the pestilence" and she's left to fend for herself. She finds a place with a gang of urchins, begging and stealing to get their daily bread. But Mary wants more than this life and when her gang's leader is killed, she disguises herself as a boy and sets off to make her own way.

Her own way leads her to the British warship The Dolphin where Mary is taken on as a ship's boy. Calling herself "Jacky", she learns all about sailing and fighting, befriending the other ship's boys and trying to avoid attention. As time goes on, she knows that her secret will come out eventually, but not before she's had the chance to fight in a few battles, join a secret brotherhood, get a tattoo, and visit a brothel...

One reason I love vacations is that long car trips give me an excuse to listen to audiobooks (yeah... Abby = geek, what else is new?). Traditionally I have picked out shorter recordings (my long drives are never all that long), but I was anxious to check out Bloody Jack since it won an honor in the first ever Odyssey Awards this year. I wasn't at all disappointed!

Katherine Kellgren's narration makes this recording a joy to listen to. Her expressive reading gives Jacky a real voice and brings all the characters to life. Each character has a distinct voice, different from the narrative voice, and Kellgren's accents are a delight.

I'd hand this to fans of The True Confessions of Charlotte Doyle and maybe Tamora Pierce's Lioness quartet.
Abby at 5:13 PM
Share