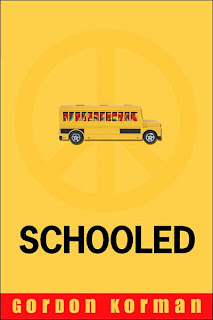 Capricorn Anderson is in for the biggest change of his life. When his grandmother Rain breaks her hip, Cap is sent to live with a social worker and attend public school for the first time in his 13 years. Cap was born and raised on a commune that used to house many families. One by one those families drifted away until it was just him and Rain. Cap's been indoctrinated to believe that money is the root of all evil, he's never witnessed any violence, he's never seen a TV or a cell phone or a CD.

Zach Powers is reveling in the fact that he's finally achieved his goal - he's become the most popular kid in the eighth grade. And as the eight-grade ringmaster, it's his duty to select the next student body president. It's a long-standing tradition to pick the geekiest, most loser-ish student at Claverage Middle School and get them elected president so they can make fun of them all year. The front runner had been the dorky Hugh Winkleman, but when Capricorn Anderson shows up, Zach knows he's got his man.

This is the first Gordon Korman title that I've read and I thought it was very Andrew Clements-ish with some Stargirl thrown in. The story is told from multiple points of view, so we can see Cap's reaction to the outside world, Hugh's thoughts on suddenly not being the biggest loser in school, etc. Short chapters and an interesting premise will appeal to reluctant readers, both boys and girls.