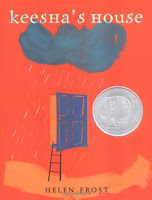 I'm gonna warn you. You might have to read this one twice. I mean that in a good way, of course. Read it the first time for the story. Meet these great characters. Characters that might be written off by the people in their lives, but who find a place to come together. Then read the section at the end that talks about the poetic forms used in the book. Then start over and read each poem again now that you know something about the traditional forms of sestina and sonnet.

Maybe you already know about sestinas, but I definitely didn't. At first I didn't even realize that the poems were written in a strict traditional form. It looked like free verse to me. Once I knew a bit more about the structure of the poetry, I had a whole new appreciation for the book.

Keesha's house is a safe place. In actuality. it's not even her house. The house belongs to a guy named Joe. Joe knows what it's like to need a safe place to sleep, so he opens his house to kids in need. They can stay as long as they want. No one bothers them. So, the house is really Joe's, but Keesha's the one spreading the word whenever she senses one of her high school classmates might need a place to crash. So the house becomes known as Keesha's house.

Through poems, Helen Frost gives us the perspective of six different kids, each finding themselves connected to Keesha's house for different reasons. Stephie is pregnant and not sure what to do about it. Jason is Stephie's boyfriend, a basketball star who's not sure he's willing to give up his dreams to be a dad. Dontay is a foster kid whose foster parents don't seem to give a damn about him. Harris's father disowned him when he found out he was gay. Carmen's been arrested for a DUI. Katie's running from her mom's abusive boyfriend. Although there's some depressing material in here, the book really has a hopeful slant. If a place like Keesha's house can exist where these teens can find support and rest their heads, maybe it's possible for them to turn things around, for them to overcome the huge odds stacked against them.

Two parts of the book are written from the perspective of adults. These poems are written as sonnets, an effective way of showing how very differently the adults see the world. It would be a great book anyway, but I really love that Frost used traditional poetry forms. I don't always get novels in verse, but this is one I could really get on board with.

I read this for the Printz Award Challenge.
Abby at 9:45 PM
Share
‹
›
Home
View web version