At my library, we celebrate a different country every January. For the whole month, our displays and programs center around that country. Last year we did Brazil. This year we did Poland. You may not know that Chicago is the city with the largest Polish population outside of Warsaw. These programs were a bit hit.

In the Adult Services department, they had a Polish cooking demonstration, the Lira Singers (a Polish music group), Polish dancers, and a program about Polish genealogy (among other things). I don't know a whole lot about those programs, but what I can tell you about are our programs in Young People's Services.

First of all, we put up a big map of Poland on the wall outside our story room. We got a nice, clear

map for not too much money from maps.com. We put out little silver stars and encouraged anyone with Polish ancestry to place a star on the place in Poland where their ancestor is from. As an added bonus, I was working one night when a small child (looked no older than three) was standing in front of the map and loudly spelling out everything on it. "P-O-L-A-N-D!" And then his dad would name the word for him. We were developing letter knowledge and we didn't even mean to...

Because none of us in YPS has any Polish background, we hired performers to present most of our programs. This way we can provide a more authentic experience for our patrons. Every month with our programming, we try to hit all our age groups (preschool, school age, middle school). For the Poland programs, we had a couple that were all-ages, one geared towards preschoolers and one specifically for school age kids.

We hired a Polish storyteller, Barbara Kozuchowska, who came earlier in the month. She was wonderful and we had a pretty big turnout, children and adults. She dressed in traditional Polish garb and told legends that developed in Krakow. At the end, she stayed to chat with people and she handed out coloring sheets that tied in with the stories. (Anyone in Chicagoland want a recommendation for a storyteller, drop me a line! I've seen her twice and she's great.)

We also contacted another local Chicagolander from Poland who had done programs for the Chicago Public Library. She brought many items from Poland including books, a beautifully embroidered shawl, and dolls. She told a couple of stories and then led participants in a craft

making some of the story characters out of Crayola Model Magic. Everyone had a great time and stayed around to chat and show off their creations.

Today we had our third Poland program. It was our Poland Adventure Trip and it was for kids in grades K-4. Every fall and spring, we do a six-week session of registered storytimes and After School Adventures is the one that we do for school age kids. This was very similar to those programs and, like those programs have been, this one was super fun (for us and (I hope) for the kids).

My coworker B, who is my partner in crime with After School Adventures, co-ran the program with me. We decorated the room before the program with snowflakes we had cut out and a red ribbon signifying the colors of Poland's flag. We started out by testing their knowledge of Poland with some fun facts gleaned from Culture Grams (a database to which my library subscribes). Did you know that Poland has many large flocks of storks and that some villages actually have more storks than people? Did you know that Poland is about the same size as New Mexico? Did you know that the most popular sport in Poland is soccer? I also brought some Polish books for the kids to look at.

Then B and I each told a Polish story from Favorite Fairy Tales Told Around the World. After the storytelling, we set up chairs and played musical chairs with traditional Polish music. As each child was "out" from the game, they could come over to the craft room and I got them started with our craft. We made a paper craft called a riband, which looks like a state fair ribbon, only made 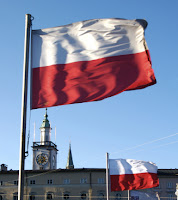 with colorful cut paper and used to decorate the house or even in lieu of ribbons in a bridal bouquet. We got the craft from the book Papercrafts Around the World by Phyllis Fioratta. We had some of the pieces pre-cut, so the kindergarteners could just cut and glue, but the older kids could add as much decoration as they wanted.

By the time they were done with the craft, it was past time to go! So we sent them out the door with their crafts and some coloring sheets. Fun was had by all. The more I work with this age group, the more I realize that I really, really like it!

Tomorrow is our last Poland program... a local Montessori teacher is coming to give a bi-lingual storytime for preschoolers and I'm sure it'll be a big hit if the weather cooperates... (it snowed today, so our attendance at the Poland Adventure was not quite as robust as we'd hoped...)