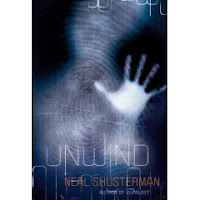 Unwind by Neal Shusterman. (Grades 7 and up.)

After the terrible war between the Life Army and the Choice Brigade, the Bill of Life was passed. According to the Bill of Life, abortion was abolished, but if a child was still unwanted by the time they reached their teens, they could be retroactively aborted... unwound. Their parents would sign the order and the Unwind would be harvested, every part of its body transplanted into someone else who needed it. Arms, feet, eyes, hair, blood, brains... The idea is that the kid will go on living, every part of him or her will still live... just in different bodies.

Connor is about to be unwound.

He found out by accident, but he's not standing for it. Connor's running away. And two other Unwinds are coming with him (Risa by choice, Lev not so much). Can they survive outside the law until they turn 18 and their lives are their own?

Unwind is an action-packed sci-fi thriller with well-developed characters that you get to know as the story unfolds through alternating perspectives. Throughout the book, the kids are not only trying to survive, they're trying to figure out this crazy world and determine the meaning of life. Connor, Risa, and Lev are each coming from a very different place, but their destination is the same... at least according to the law. As they keep running and discover more and more information about their world and the unwinding system, right and wrong may not always be so clear.

I couldn't put this book down and the alternating points of view really kept the pace up. Twists and turns are everywhere and you never know exactly who you can trust. I found the future world Shusterman has built to be really super intriguing (even now, I want to know more and more about it) and seeing the characters grow and change really made me feel like I got to know them.

It's dark, yes, and even rather gruesome in parts. And there is a lot to think about. Do we have souls? Are souls divisible? Where does life begin? Where does it end?

Hand this one to fans of The House of the Scorpion by Nancy Farmer or Lois Lowry's The Giver. This would be a great book for a YA book club because it's certain to spark some interesting discussion.

Looking for your next gripping, can't-put-it-down read? Pick up Unwind. But (as LeVar Burton would say) don't take my word for it...