What My NieceS are Into

My niece S just turned two and she is still SO INTO sharks. She has also increased her repertoire of words to include just about any sea creature you can imagine. She had the most amazing ocean-themed birthday cake for her party a few weeks ago: 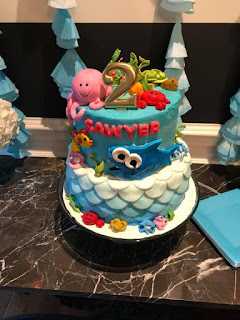 Of course whenever I am reading reviews of board books or picture books I look for anything that she might like. I came across a new board book that looked super cute AND it was on super sale at Amazon, so I scooped it up and added another recent gorgeous board book that I had purchased for the library. 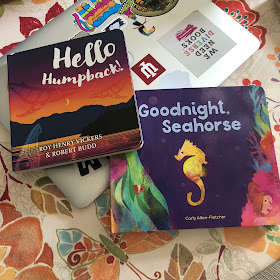 Hello Humpback! by Roy Henry Vickers and Robert Budd (Harbour Publishing, 2017) is a gorgeous book featuring animals of the Pacific Northwest. The text is super simple and the illustrations are just so beautiful. It's a great book for talking about the pictures and naming different animals, including some that are rare to find in books like skate, halibut, and prawn. Roy Henry Vickers is a First Nations artist and this book truly celebrates the diverse life found on the West Coast. This would be a perfect gift for kids living in or visiting the Pacific Northwest or for any little ocean lover.

Goodnight, Seahorse by Carly Allen-Fletcher (Muddy Books, 2018) is another gorgeous book about sea creatures. The text is very simple - each spread says goodnight to a different sea creature as seahorse heads to bed - but this one also includes some unusual words like wobbegong and lionfish that go beyond your typical book sea creatures. The back of the book identifies many of the background creatures found throughout the pictures and it would be fun to go back and search for them all.

So, some new ocean books for my niece annnnnd I bought a book to welcome my new niece (!!!) due in September! 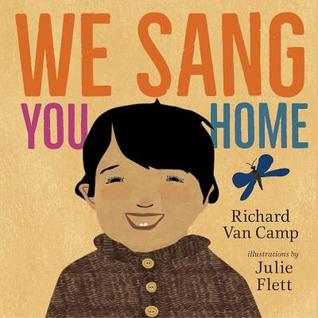 We Sang You Home by Richard Van Camp, illustrated byJulie Flett (Orca, 2016). This has become one of my favorite new baby books to give. I touched on this one a little bit in a previous post, but I want to expand on that. This board book is written by a First Nations author and illustrator and features a family welcoming their new baby. The words are so affirming and perfect for reading to a new baby:

and so forth.... Just a beautiful message in a beautiful book that features a First Nations family but with a message that is so universal.

I can't wait to welcome a new niece and find out what things she will be into as well!

If You Leave Me

1950s and a Korea at war in If You Leave Me by Crystal Hana Kim.

The country is splitting in half and Haemi feels like she's splitting in half, too. Her family has fled their village due to the fighting and they're now refugees, surviving day to day. And Haemi has a choice to make. She is in love with her childhood friend Kyunghwan and he loves her back... but another boy in the village, Jisoo, has proposed marriage to Haemi. Jisoo is well off, he can provide for her family, while Kyunghwan has nothing but dreams. Haemi yearns to follow her heart with the boy she loves, but her heart cares just as much about her ailing little brother who desperately needs food and medicine. Haemi must make a choice that will affect not only her own life but the life of her family for generations to come. And that's only the beginning.

I loved this multigenerational novel set in Korea during and after the Korean War. It was a book that I just wanted to keep reading forever because I loved the characters and I was fascinated to see how their choices took their lives in different directions. Crystal Hana Kim writes with such emotion and her prose is heartbreaking; I felt like I was living the story along with the characters. Readers get the story from multiple points of view allowing us to see the story from different perspectives.

The setting is just as important as the characters as there are many parallels between a country being split apart and the characters being split, caught between their desires and reality. The book brings the Korean War to life, too, illuminating how families were literally split - if your family resided north of the dividing line you would likely never see them again.

This book is out August 4 - preorder now!

Hand this to readers of multigenerational historical fiction. I would press this into the hands of Pachinko's many fans (Pachinko by Min Jin Lee, Grand Central Publishing 2017) or readers of The Lowland by Jhumpa Lahiri (Knopf, 2013). Readers of character-driven historical fiction set in wartime like The Nightingale by Kristin Hannah (St. Martin's Press, 2015) will also enjoy it.

If You Leave Me by Crystal Hana Kim. Adult. William Morrow, August 2018. 432 pages. Review copy provided by publisher at ALA.

Stopping by Bookstores on a Summer Afternoon

This past weekend my husband and I drove down to Nashville, TN for a long weekend. We had a ton of fun and one of the things I wanted to do was stop by one of my favorite independent bookstores, Parnassus Books. This is a wonderful bookstore co-owned by author Ann Patchett and I love to stop by whenever we find ourselves in Nashville and have a little time.

As a librarian I don't often need to purchase books. I have a whole library at my disposal and I often get access to galleys and e-galleys. But it's important to me to purchase books by diverse authors so that I can show publishers with my DOLLARS that I want diverse books. It's one thing to show them with my words, which I try to do, and with my library dollars, but I also want to show them with MY PERSONAL DOLLARS. So much better when I can do that and support a great independent bookstore at the same time!

I was so impressed by the diverse selection offered and displayed by Parnassus Books. They had diverse and own voices books heavily on display and faced out. There were many diverse books among their staff picks. They are doing what all libraries should be doing: championing marginalized voices and providing access!

Here are the books I ended up purchasing: 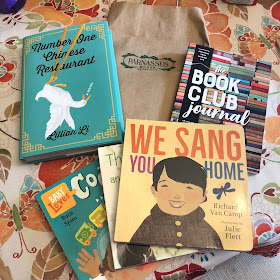 Number One Chinese Restaurant by Lillian Li (Henry Holt, 2018) was prominently on display as a staff pick and I have read some great reviews of it. Kirkus called Li "a writer to watch" and I love immigrant stories.

I picked up The Book Club Journal off a display of the store's recent and upcoming book club selections. Although I already have a notebook designated as my book club journal, this one is specifically designed for the task with space to keep track of where the club met, what food and drink was served (always important!) and everyone's thoughts about the book.

And of course I had to pick up some board books for my niece(s). I was so excited to see that they had two copies of We Sang You Home by Richard Van Camp, illustrated by Julie Flett  (Orca, 2016) on the shelf! This is a super sweet board book perfect for welcoming a new baby and it's written by a First Nations author. It features a First Nations family and the message of welcoming and surrounding a new baby with love is so universal. It's the perfect first read-aloud and will be my first gift to my new niece (ETA late September)! More on that in a future post.

I also grabbed one of the newest Baby Loves Science books - Baby Loves Coding by Ruth Spiro, illustrated by Irene Chan (Charlesbridge, 2018) - and The Babies and Doggies Book by John Schindel and Molly Woodward (Houghton Mifflin, 2018).

This summer, my husband made us a PVC Pipe Xylophone for the front porch of our library.


Here is where we found instructions to make it: How to Make a PVC Pipe Xylophone by Frugal Fun 4 Boys.

We delivered it to the front porch of our library where it has lived musically since June 1 when our Summer Reading Program started.

I bought a handful of flyswatters and doctored them with fun foam to make a "mallet". They didn't walk off as I thought they might, but the fun foam only lasts so long with regular use as a mallet, so I have made two replacement "mallets" so far, which is about what I expected.


I also made up some signs that we posted on the front windows near the xylophone to give families ideas of what to do with it. Most used, I believe, have been the songs. Since the pipes are color coded, anyone can play these color coded songs, no musical ability or music reading required. I'm posting the PDFs here and you're welcome to use them or edit them if you'd like to use them at your library:


The Xylophone cost about $75 for the supplies and my husband donated a day to working on it for us. If you don't have a handy partner, colleague, or friend or if you yourself are not handy, it might be worth asking your local hardware store if they know anyone who might volunteer their time and skills to build it.

It's been well worth the effort to see people of all ages interacting with it, experimenting with sound and creating music!
Abby at 7:11 AM
Share

You know the story of Rumpelstiltskin? They got it wrong. It's really just a story about paying back a debt. So begins Miryem's story in Spinning Silver by Naomi Novik. In Litvas, a land with a constantly encroaching winter, Miryem's family is starving. Her father is the local moneylender, but he's so softhearted that he will never collect what he's owed. So Miryem takes over and finds out that she has a skill for moneylending and making deals. When her ability to take silver and turn it into gold attracts the nearby magic folk the Staryk, rulers of ice and snow, Miryem finds herself captured by the King of the Staryk in a bargain that means much more than she knows.

So, Miryem is such a great, great character. She sees her family is in trouble and she takes matters into her own hands. She ends up not only saving them from starving, but building a comfortable life for them. Miryem is a lady with ambition. And, just as it does in so many cases, that ambition attracts some trouble. The townspeople are bitter that they can no longer get away with shirking their debts. And the Staryk see what she can do and want to capture that power for themselves.

And that's just one part of the rich tapestry that is this fantasy novel. We also hear from Wanda, a local peasant girl who comes to work at Miryem's farm to pay off her father's debt. And Irina, a plain girl whose father is determined that she will marry the tsar, no matter how unlikely that seems at first. All of their fates are intertwined, though none of them know it at first, and how they're connected is slowly revealed as you read farther and father.

This is a great summer read for when the temperatures are climbing. The magic land of ever-growing winter will have you shivering even as the heat index soars outside. This is a story of strong women who use their minds to solve problems and who refuse to settle for what society seems to want for them. There's a rich tapestry of magic here, too, and it's not always easy to see who the good guys are.

If you like fairy tale retellings and fantasy that completely transports you to another place, pick up Spinning Silver. This book is published for adults, but I think there's a lot of teen crossover appeal, too.